An online portfolio of an SK educator

Can online social activism be meaningful and worthwhile? Is is possible to have productive conversations about social justice online? What is our responsibility as educators to model active citizenship online?

The first 30 seconds or so of this video portrays the often-referenced parable of the “babies in the river”. In the first part of the parable, villagers scramble to “save” the babies who are coming downstream which is known as downstream thinking. While, in the latter part of the parable, some of the wise villagers head to the top of the stream to figure out how and why the babies are in the stream in the first place. By heading to the top of the stream, they are seeking to solve the problem at the root rather than trying to do damage control at the bottom. This can be considered upstream or proactive thinking.

Another parable I often reference in regard to proactive (upstream) versus reactive (downstream) thinking is found in the 1895 poem The Ambulance Down in the Valley (Malins) in which people keep slipping over the edge of a dangerous cliff while admiring it’s beauty. The townspeople “said something would have to be done, / But their projects did not at all tally; / Some said, “Put a fence ’round the edge of the cliff,” / Some, “An ambulance down in the valley.” The poem alternates between discussing the differing viewpoints but concludes with this message: “To rescue the fallen is good, but ’tis best / To prevent other people from falling / …Better put a strong fence ’round the top of the cliff / Than an ambulance down in the valley”.

When I think about activism, I think it is important to consider how activism can be proactive or reactive in nature and how citizen choices and actions can either support social change or support the status quo. In Westheimer & Kahne’s (2004) article What Kind of Citizen: The Politics of Educating for Democracy the authors define three types of citizens:

I first read Westheimer & Kahne’s (2004) article in one of Dr. Marc Spooner‘s courses. Dr. Spooner suggested that we (society) need people to donate food and we need people to run the food bank because there are hungry people. We need personally responsible and participatory citizens who are doing the charity-type work. But we also need people to rise to the justice-oriented level, ask why the people are hungry in the first place and take action as a result. Any single person can work in and out of each of the citizen types simultaneously and also at different points in their lives.

Westheimer & Kahne (2004) were not specifically discussing citizens of the digital realm, but as our digital identity is becoming an extension of or (perhaps) synonymous with our personal and social identity IRL, then Westheimer & Kahne’s types of citizens and their applications can be extended to digital society. While taking Dr. Couros’ EC&I 832 class in Fall 2018, I created a vlog about the intersection of digital identity and social media activism where I examine a few examples of how Westheimer & Kahne’s (2004) types of citizens come to fruition in digital spaces. Consider watching for a more detailed explanation.

In thinking about whether social activism can be meaningful and worthwhile, I decided to take a look at one of the biggest hashtag movements from the past few years, #BlackLivesMatter, which gives us evidence that social media activism can be meaningful and worthwhile, as well as show possibility in having productive conversations about social media online.

#BlackLivesMatter began six years ago as a hashtag and has evolved into a movement as a result of the death of black men at the hands of white police officers, according to this source. This CNN article  states “while there is no way to know exactly how large the movement has become, the organization has branched out with chapters in 31 cities and held rallies, boycotts and other actions across the United States”. #BlackLivesMatter has evolved into an organization with strong leadership including others who have emerged as social media leaders. Many of their actions, including plans for What Matters 2020, can be found at their website: BlackLivesMatter.com. Many involved in the movement cite that it’s power comes from the number of leaders, “many people doing important work and leading in different ways”, “[social media] activists…use the platform as a bullhorn to share their message with the public and inspire others to take part” (Source). The discussions online often lead to real-life actions,  demonstrations, and political pressure in a new wave of civil-rights activism. Reading 2 on this page indicates further examples of policy change directly related to the movement. Additionally, #BlackLivesMatter has created opportunities for intersectional discussions of other vulnerable communities, for example, #SayHerName and BYP100.

According to a 2018 Report, this hashtag has been used on average of 17,000 times per day since its emergence which points to its ability to stand the test of time. While it is common for many hashtags to fade away quickly, it is difficult not to reference #BlackLivesMatter when discussing police interactions with racial bodies. Further, the hashtag often resurfaces in the face of new events or new stories related to this topic (source).

I spent a considerable amount of time examining some of the results of the #BlackLivesMatter movement and one thing I can say for certain is that this hashtag has done more than spark conversation. It has been a mobilizing effort, both on- and offline. While there is still much work to be done on the topic of black liberation movements, #BlackLivesMatter has and continues to spark political and social change.

(For further reading about how far the movement has come — especially in a political sense — and where there are opportunities for the movement to improve and grow, consider Five Years Later, Do Black Lives Matter?)

Social media has brought about new ways to navigate the political sphere, but with it comes several challenges. Some may question the authenticity of a social media movement, and whether or not the support as a result can bring about real change. It has been shown that it can happen, with very evident successes. However, there are also movements that don’t result in the same kind of change and fade away from the collective consciousness soon after making its appearance. Source

While the #BlackLivesMatter (and other significant hashtags such as #MeToo, #MarchForOurLives) movement presents an inspiring and hopeful example for social media activism, there is much to be desired. 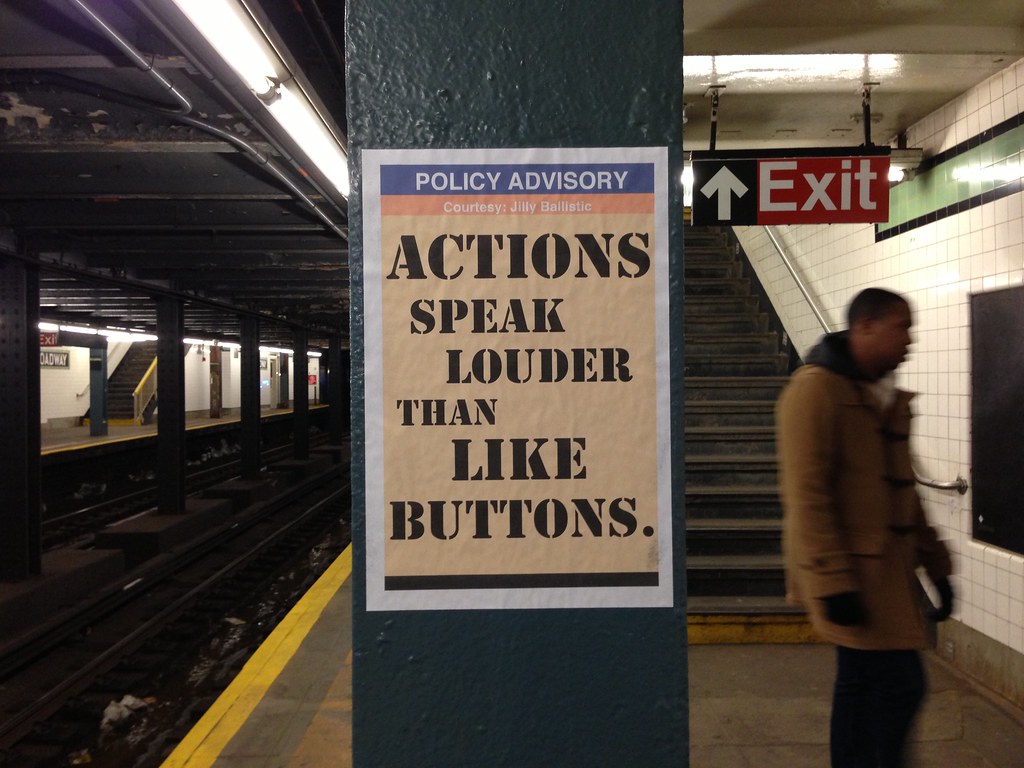 In class on Tuesday, Dr. Couros shared the image to the right. It captures perfectly, the flip side of the social media activism debate.  A few of the articles I read this week expand on the issue of social activism (or #slacktivism) being regarded as meaningless. I will highlight a few of these points from two articles.

Maclean’s (2014) The Real Problem with #Slacktivism

Social Media Bumper Stickers: Hashtag Warriors are Not the Activists Needed to Save Us (this is a pretty dreary read and I don’t agree with everything the author says)

Platforms like Twitter and Facebook have become the new grounds where important discourse concerning political and civic affairs take place. Whether it is a viral hashtag, or a 30 second video that garners worldwide attention, it is safe to say that many social media users of today have participated in some form of internet activism, such as by “liking,” commenting, or sharing related posts. This then poses the question: could this new form of activism ever be as effective as storming the streets of your city? Source

The article Slacktivism is Having a Powerful, Real-World Impact makes a positive case for slacktivism. The article cites two recent studies which found that:

These articles reiterate some of the main arguments against social activism. Namely, that social media allows for a false perception of social justice participation and as a result, deeper levels of public action such as organizing or participating in demonstrations, as an example, are hindered. Recent research highlights the mixed perceptions about the impact of social media activism. The Pew Research Centre (2018) conducted a study on Activism in the Social Media Age in the US. Their findings support what I am claiming in this blog post, that although social media has provided a platform to give voice to vulnerable populations, it can also give people a false sense of altruism. The report documents other popular hashtags such as #MeToo, #LoveWins and #MAGA as well as notes differences in responses from participants based on age, gender, demographics, political lean and other defining factors.

In my discussion on #BlackLivesMatter which highlights some of the positive aspects of social media activism, and in my discussion of #Slacktivism, the flip side of this debate, highlighting the ways in which social media activism lacks depth and substance, it is fairly easy compare to Westheimer & Kahne’s (2004) ideas about different types of citizens and relate general social activism to social media activism. Dr. Couros helped us bridge the offline and online realm in class this week. If I return to the food bank example I presented above, we can compare. These types of citizens may do the following in the digital realm:

Our society needs all of these citizens and we all have the responsibility to occupy each of these types at various points in our lives.

Which side of the debate do I fall on? Activism or slacktivism? While I can relate to many of the points made by slacktivist supporters, large scale movements such as #BlackLivesMatter allows me to have hope that social media offers a platform for improving social injustices and inciting social change. In my own life, connecting with hashtags that represent large scale social movements has allowed me to learn more about the issues being discussed, bring the issues to discussions with family, family, and colleagues, and think deeply about how I can be part of the change. This article suggests “the very openness of social media platforms makes it possible for voices…to find an audience and shift our understanding of events”. I think at the most basic level, social media gives us the space to do just that . Even if people choose not to participate in these discussions on social change, the hashtags, news articles, videos, that they find on their social media platforms make it difficult to ignore. Someone may not choose to participate in a demonstration or call-out politicians but a “like” on an article they read which lead them to think differently about a particular topic has the power to change the collective understanding of the population. This shift in thinking is the first step to becoming justice-oriented.

As classroom teachers, we have a responsibility to present social justice issues to our students. If we chose not to participate, our silence indicates a clear message, that these are not issues we care to address and therefore, do not value (Source). If we choose to remain silent on these issues, we risk allowing our students to become passive citizens rather than justice- and action-oriented. For the sake of social change, discussions of social justice matter deeply in online and offline spaces. Let us, as teachers, be part of the upstream thinking, let’s start asking why there are babies in the river in the first place, and let’s put up a fence to prevent further damage to our communities instead of an ambulance down in the valley.

We as educators have a serious responsibility to address social justice issues in online spaces – even if the resulting discussions are uncomfortable or controversial. – Dr. Couros, Social Justice in a Post-Truth World

6 thoughts on “Social Media Activism…Are We There Yet?”